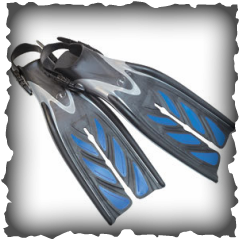 Over 5 years of research and development brought the highly regarded and best-selling SF-8 X-Pert Zoom split fin to market in 2003.  TUSA redefines the fin market again with the introduction of the SF-15 X-Pert Zoom Z3.

The SF-15 further improves upon the performance, features and design of the SF-8 with the incorporation of 3 materials, 10% longer blade length, enhanced propeller-fin technology, reinforced blade rails and optimized blade scoops.  These new features along with TUSA's patented 27 degree Angled Blade Design and EZ strap buckle system make the SF-15 THE fin for divers.

TUSA's Angled Blade Design:
When using the standard traditional blade fin, with the leg completely extended, there remains an angle of 27 degrees between the heel and the foot and the calf of the leg, causing a 10% loss of propulsion. Because the fin is angled below the body, during the kick phase, the body is pushed forward and down, instead of straight ahead.  With the SF-15 fin, that 27 degree angle has been designed into the fin.  This means that 100% of the energy expended during the kick phase is directed toward the propulsion of the diver. TUSA developed a robot that can replicate the kick-cycle and movement of a human's leg.  The robot is able to mimic the motion of a human exactly and relay accurate data.  TUSA has been able to analyze the performance of the fins under several conditions. The robot is able to simulate swimming through the water using kick variations, such as a large scissor kick with a slow repetition and vice versa.  Using the latest technology, this robot measures the energy expended during the kick and the propulsive force that is created using that energy.  To achieve maximum performance from this fin, use a small bent-knee kick with a light rhythm. This creates less strain on the leg muscles compared with traditional fins, reducing the diver's fatigue and subsequent air consumption.